Cold temperatures of winter often produce yellowing or browning of palm fronds of several different palm species growing in the .  With the warmer temperatures of spring the tendency is to remove the damaged unsightly fronds as soon as possible.  For the homeowner that may only have a few trees, which they prune or have their gardener prune, timing is not generally an issue.  However, for the commercial property or HOA that may have a considerable number of palms, which are typically pruned by professional tree companies, resisting that initial urge to prune early could save money and provide more attractive palms during the course of the summer.

Early spring pruning may remove unsightly fronds; however, the fruiting structures called inflorescence, garlands, or flower stalks may not have begun to grow or elongated sufficiently thus they are not removed with the fronds.  With increasing temperatures of spring and summer the flower stalks will grow at a very rapid rate emerging from the tree’s crown, along with new fronds.  Flower stalks of Mexican Fan Palms may reach lengths of 10-15 feet and will produce thousands of creamy-white flowers with a hint of pink and eventually small ½ inch berries or drupes that will fall to the ground becoming a nuisance in landscape and hardscape areas. 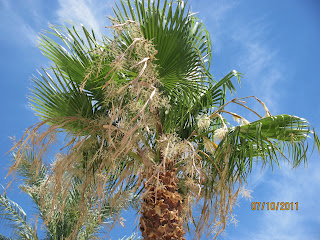 Pruning palms late spring or early summer, just
prior to maturation of fruit, will allow for removal
of unsightly fronds, flower stalks, and fruit;
therefore, only one pruning operation will be
required for the season.